I've wanted to build dressers for my kids for a long time. I've always loved the Craftsman style of furniture and design so I was leaning in that direction. I've had plans in mind and even bought a book full of plans for craftsman furniture. I wanted to build the classic Stickly Dresser.

A few years back I had to break down and buy one for my son's room. I was a little spiteful that I hadn't had the opportunity to build one yet so I found the cheapest one out there, knowing that I'd be building an heirloom dresser "really soon". It's been about 3 years since then and I'm finally getting the opportunity to dive into a pair of dressers for my kids to cherish for a lifetime. Sadly it's due to COVID-19 pandemic that I'm afforded this opportunity but a labor of love like this project is really just what you need to help sustain through these strange times where time itself seems to be altered and the normal temporal benchmarks we rely on to schedule our lives are absent. While certainty in our everyday lives becomes a luxury, its a little comforting to know that there's still certainty in the shop and that progress will continue. 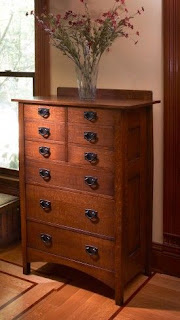 In the beginning there were boards, lots of big boards...

What's pictured is only about half of the wood I had to go through. There is an equal pile of mahogany but I couldn't fit it all in the shop at once for the layout process, and a process it was. The ash is all 2in thick so I can saw it in half and get parts from both sides. The mahogany is only 1.5 in so I can only get one board out of the thickness plus a 1/2 thick board that I can still use on other parts of the dresser.

Before I could start laying out for all the parts I had to evaluate the wood for grain pattern, color, defects, and continuity between boards. Luckily both these piles of wood came together so they are all nicely uniform. Next, I had to consider the most visible parts of the dressers and start picking those parts first. I wanted to get some reasonable straight-grained stuff for the legs, side rails and stiles, and some nice cathedral arches for the panels. Then I had to figure out what my options were for all the drawer fronts. After many false starts and erased lines, I finally coaxed a bunch of boards out that look good together. The ash was more challenging than the mahogany for a couple reasons. It had a fair amount of sapwood in it and I had to keep flipping and considering both sides of the boards when looking for complimentary grain patterns. The mahogany had a pretty uniform grain pattern so it didn't take so much deliberation when choosing how to lay out all the parts. 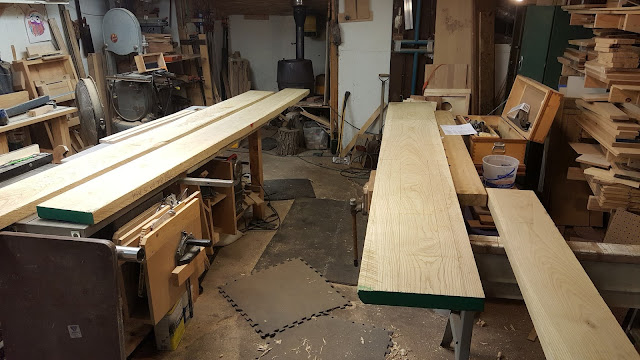 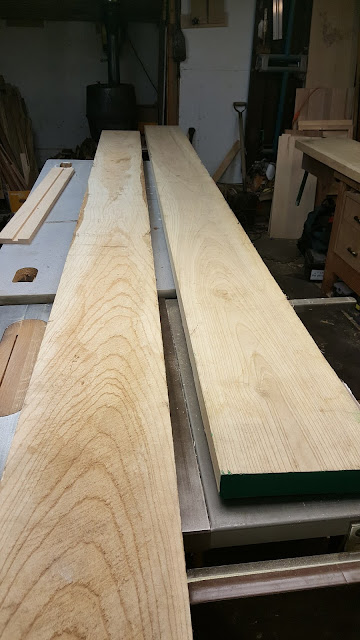 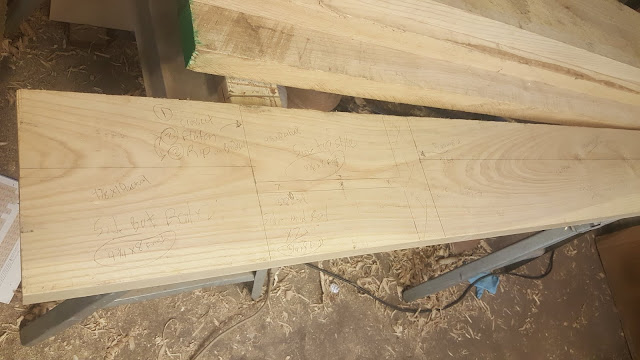 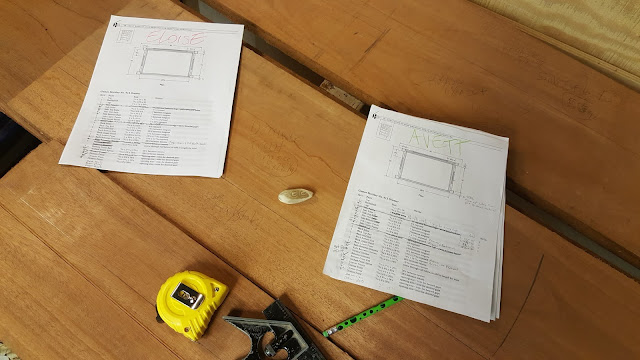 As with any casework you have to start with the carcass so I went to work on the legs and side panels. The ash proved to be the easier of the two when it came to the legs. The boards were already thick enough so I just needed to cut rip them off and square them up. The mahogany was a different story. When I ripped off the pieces to be glued up, they express a fair amount of bow. It took a substantial amount of time to flatten them. I had to do it by hand because my 6in jointer just isn't long enough for a 40 in long board.

Next up are the side panels. They include two full height stiles, 3 rails, and 2 panels. I've been anticipating resawing these panels for a while now because they are too wide to resaw on the bandsaw. That means that I have to cut most of the biggest pieces by hand. Luckily I have a nice hand saw for the job.

The first step is to resaw all the material into roughly 1 inch thick boards before flattening. Of course, I turned to my most appreciated tool in the shop, my 1940 Delta bandsaw, to do the resawing. I have loved this tool since I saw it sitting on the sidewalk at the Park Point Garage Sale and brought it home. As I saw with the legs, slicing these boards in half released some stress and I had to plane out a lot of bow by hand.

Some may wonder, "Why the shims under the high spots?". There's an old saying about planing boards, 'in like a banana, out like a banana'. That is to say that if you put a board through the planer that has this kind of bow, all you get out the other side is the same board with the same bow, only thinner. Planers don't take out bow. That's the job of a jointer, but since I only have a six inch jointer the bed is not long enough to accommodate the side rails. So again, why the shims? In order to get the board totally flat, I have to take out the natural bow. If I were to just clamp the board into the tail vice and go to town. my big-ass jointer plane would just push the board flat down to the bench giving the same results as sending through the planer. The shims are there to keep the natural curve in the board while I plane so I can plane out the bow. Another option would be to make a sled to run through the planer that had the same shims to hold the board in its natural shape. The be honest, that didn't occur to me at the time because it was still early in the pandemic and I actually wanted to do as much by hand as possible.